Last week, I attended the Coerver Coaching course, Play Like The Stars. This is the second course I’ve attended, following on from the Youth Diploma course last year.

For those who haven’t heard of Coerver, they are a company set up in 1984 by two men inspired by the teaching of the Dutchman Wiel Coerver. Charlie Cooke, a former Chelsea player, and Alf Galustian, created a teaching method aimed at all ages, but especially for ages 5-16, that focused on individual skills development and small group play. They believe that the building blocks for successful players are on the foundation of individual skill on the ball, so without this, other elements such as mental and physical strength, and tactical knowledge would simply fall apart. At the core of what their players are taught, is ball mastery, which then leads into improving their first touch, striking the ball, running with the ball, and 1 v 1 situations.

I remember the first presentation I saw from Coerver a few years back at the Grass Roots Football show in Birmingham. It was just a seminar, not one of their full demonstrations, and to be honest, I wasn’t convinced. Like some, I felt that the teaching method was too individual, and the core of successful teams was being able to play well as a unit. As I have spent more and more time coaching the game, I have to admit I’ve been converted. There’s a few reasons why. 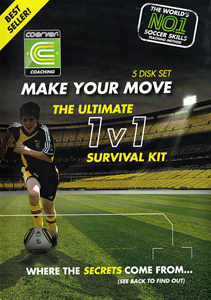 Firstly, I never really got any decent coaching as a player. And any I did get, taught me very little about things like ball mastery. And this was at the crucial age of development, it is believed that up to the age of 12, the ability to develop skills quickly are strongest (so for example, if you wanted to learn a new language the same principle applies). As someone who still plays the game in my 30’s, I’m fit and strong enough, but my touch on the ball is still not good enough (and when I took part in the demonstrations on the course, I’m sure everyone there would agree!). Let’s also look at the problems affecting the British game. Recently I went to watch England play Holland at Wembley, and one of the things I took from the game, was that both teams were attempting to play a similar way…try and play from the back, push the full backs up, play quick passing football. The Dutch were far more capable of doing this because everything they did, they were able to do in one or two touches, whereas the England players needed two or three. The absolute key was that the Dutch, from the goalkeeper to the strikers, were so comfortable with the ball. Also, although football is a team game, the team relies on each player’s ability to come out on top in individual situations. How many times has a coach instructed a player to “win their individual battles”? Lastly, look at the list of clubs that employ Coerver’s methods, and its growing. A lot of very important people in the game are seeing they are on to something here.

So, as mentioned, the first course I attended was last year, over a weekend, based at Fulham’s excellent training ground in Surrey. The one downside was that the weather was awful and we all got soaked! The course focused on building your coaching sessions from the use of ball mastery as a warm up, developing each topic by repetition, bringing in speed and complexity, and finally competition. It was a great two days, and I took a lot from the sessions that, although I was coaching adults, worked really well with the players. If I look at the structure and content of the course, and compare it to, for example, the FA Level One course, I can’t help thinking that players are going to learn more from Coerver.

The follow up course this year was again based at Fulham’s training ground, and fortunately the weather was much better…I even caught the sun a little! This course focused more on the 1 v 1 skills that we were introduced to on the Youth Diploma. There is the belief that certain skills are God given to only the most talented, the likes of Messi and Maradona. Coerver challenges this, breaking down these skills into core elements, again using repetition to improve, then developing the skill with greater speed and complexity and finally introducing to a competitive environment. The 1 v 1 areas covered were the ways to beat an opponent – changes of direction, stops and starts and feints. These were covered through the day, and we finished with a couple of drills on mentality, which having worked with some difficult players in the past I found very beneficial. We also went through a reading list, so I have a couple more books on my Amazon wishlist to get through. Always keen to get involved as I still play, I took part in the demonstrations, several times made to look stupid due to my limited ability, but thoroughly enjoyed the experience. And it’s always good being able to speak to other like minded coaches about their own experiences.

Each course I have attended, we also get a manual with all the drills and a DVD. Coerver have an array of materials available from their website and also from our friends at SoccerTutor.com, and many examples also on YouTube, it’s well worth a look. If you happen to attend the Grass Roots Football Show, the sessions they deliver in the main arena are well worth a watch, and often have watchers nodding in appreciation. Coerver are also introducing a programme where they can come to your local club and put on a session, so there are plenty of opportunities to find out more about what they do. The Youth Diploma will carry on again next year, with more courses to come, and I highly recommend getting yourself on one of the courses if you’re interested in developing as a coach. Let’s hope in a few years time, the players coming through in this country have the technique to match the best in the world, and can say that this sort of coaching at grass roots level helped them on their way.