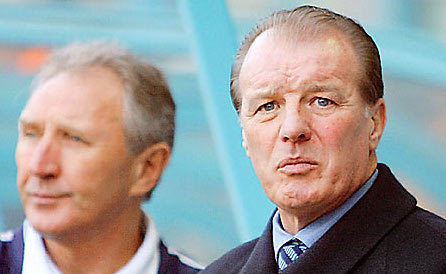 Firstly a disclaimer. As a Watford fan, I’m unlikely to feel much warmth for Dave Bassett, although on reflection, he was always going to have a difficult task, following the positive years at the club under the stewardship of Graham Taylor. Bassett’s disastrous six months are covered along with the rest of his extensive managerial career in this 2002 autobiography.

Having said that, I was interested to read Bassett’s thoughts on his time at the club, as well as the rest of his career which has stretched over three decades. He was the architect of the rise of the original Wimbledon, the infamous “Crazy Gang” that so enjoyed upsetting the football applecart. As Vinnie Jones mentions in the foreword, although Bassett left the year before Wimbledon’s 1988 FA Cup win, many felt Bassett was one of the major reasons they overcame the mighty Liverpool on that May afternoon. There is plenty within the chapters of descriptions of successes on and off the pitch, as well as the goings on in the “Crazy Gang”. Following the aforementioned troubled spell at Vicarage Road, Bassett had a long spell at Sheffield United, who he successfully guided to two promotions and spending several seasons in the Premier League.

Dave Bassett had much more than on the field goings on to deal with at the Blades, and there is a chapter devoted to this. Continuing with the off field battles, when Bassett moved on to Nottingham Forest, he then had to deal with the difficult character that was Pierre Van Hooijdonk. He did however gain another promotion from what is now the Championship. Bassett also had two spells with Crystal Palace, one significantly shorter than the other! The final chapters sees Bassett’s time with a Leicester City on the decline both on the pitch and financially, and his handover as manager to Mickey Adams, as the more experienced man took a step up to a Director of Football role.

As you might expect from a man known for chirpyness and being able to talk ten to a dozen, the book is fast paced and is in the style of “this happened, then this happened, then this…”, in chronological order. If you’re a fan of the overuse of football cliches, then this will also be a book to fulfil your needs, as hardly a paragraph goes by without the use of them!

For those interested in football, particularly a step back from the glory of the top division, then the book provides a good insight into one of football’s more colourful, and in the main, successful managers of recent times. The Dave Bassett autobiography is no literary masterpiece, and as mentioned the use of cliches is excessive, but it’s an entertaining read nonetheless.