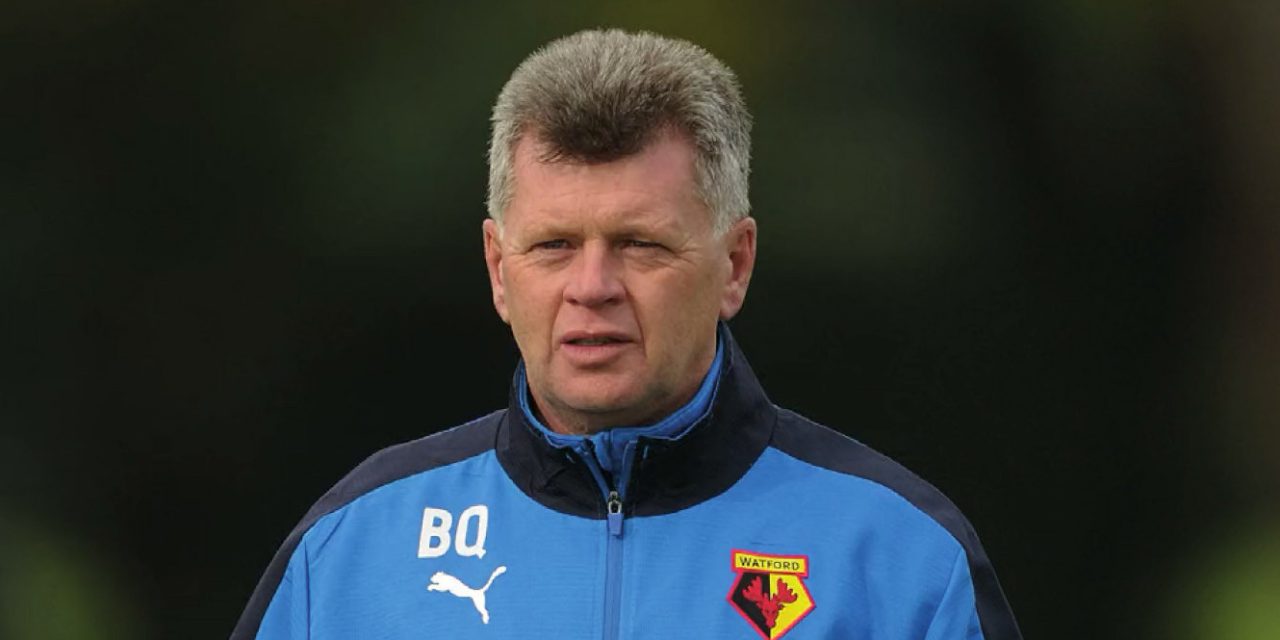 Away from the apparent glitz and glamour of first team football, there are club staff doing plenty of hard work to get the potential stars of the future ready for a career in the game. Rarely would fans outside of the particular club have much idea of who these individuals are, except perhaps if one of them was asked to act as Caretaker Manager after the chairman had decided to dispense with the services of the entire first team coaching staff after a disastrous run of results. Quite often, the Youth Team Coach or Chief Scout is given a few games and asked to do the best he can and keep things ticking over until the unveiling of a new manager. It seems a lottery after this if the former caretaker even gets the opportunity to return to their old job, should the new manager decide to bring new staff in.

This is a situation not unfamiliar to Watford’s Head of Academy Coaching, Barry Quin, who was given the managerial reins at Brentford for three games at the end of the 2006/7 season after the sacking of Leroy Rosenior and Scott Fitzgerald. At the time, Quin was Head of Youth Development and ran the club’s Centre of Excellence, before leaving in 2010 as the club reorganised in preparation to become a Category Two Academy. Quin coached at Watford the following season, becoming Head of Coaching at the Academy in 2013. At the time, despite having Academy facilities of the standard of a Category One or Two Academy (according to EPPP evaluation), Watford only applied to be a Category Three Academy, although their recent promotion to the Premier League has seen them apply as a Category Two Academy, and bring in new coaching staff such as the former Leeds, Liverpool and Australia star Harry Kewell as under 21 coach. Despite suggestions that Watford’s famed youth development has been forgotten with the riches of their current owners, Watford gave professional contracts to three Academy players during the summer in addition to promised contracts to a couple of their highly talented 16 year olds. Quin has been involved in the development of these players, and presented a session to the London Football Coaches Association last month on Passing in Tight Spaces. 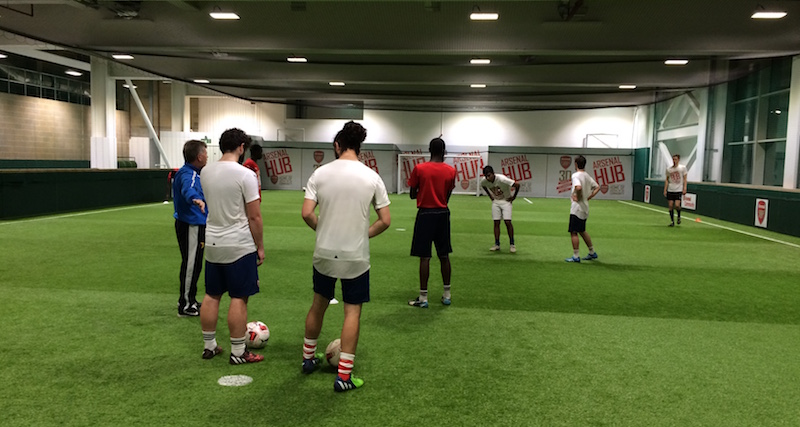 As an introduction, as well as outlining his career to date, Quin described himself as a traditional coach, believing in strict discipline and correct technical detail. He feels that for Academy players, the technical, tactical and physical elements are a given, and it is often the psychological side that is the breaker between success and failure. An advocate of the “four corner” approach to coaching, Quin has paid attention to the social element, and mentioned observing and being impressed by the training of the British Olympic diver Tom Daley and his mental approach and mindset. As a club, Watford have introduced a Coach Competency Framework to identify best practice and areas for improvement for all their coaches; this is not only on the training pitch but in other elements such as presentation and multimedia skills. It was noticeable throughout the session that the Watford coach emphasised the social elements of the coaching.

In terms of structuring sessions, Quin suggested a format of game followed by technical coaching followed by a game, admitting that players were often keener to turn up on time if they knew a game would be the first thing they do – an interesting alternative to the traditional build of coaching sessions. Having observed Quin in a Watford Academy session several years back, it was also noticeable that the players were given small exercises in pairs that they work on while waiting for other players to arrive – a preferable alternative to either standing around or the mindless whacking the ball at an empty goal?

The session took place on an area which in terms of size was like an narrow seven-a-side pitch, not the easiest for attacking type exercises. The first exercise involved working the length of the area with passing and moving and passive opposition. In the session itself, Quin suggested that he would not impose restrictions on numbers of touches or worry too much about the technical coaching at this stage, but would look for the players to get the exercise working correctly. As complexity is added, so the coach stepped in to make little tips on touch and body shape, also working on the social element of communication whether verbal or non-verbal. Quin added in the debrief that an exercise like this could be used over a full sized pitch as a squad practice with more than one coach working with individual groups of players – one with the goalkeepers, one with the central defenders, one with the strikers etc…. An example of this is shown with the downloadable session plans.

Free Download: Coach Your Team to Pass in Tight Spaces

Subscribe to our weekly newsletter and receive free Academy practise examples to use in your own sessions.

The second exercise, as suggested earlier, worked in a smaller and more concentrated area, and was a rondo based drill, with initially four players on the outside and two defensive players inside. Defenders were rotated regularly to ensure the intensity was kept high, and a fifth offensive player was added in the central area to add a further option. The key here was scoring, and Quin emphasised the need for competition even in practice. A single point was awarded for a successful pass, but ten for a pass through the central area, thus rewarding the “killer” pass. Points were also rewarded for imagination, such as clever disguises of passing. Eventually, movement between the outside players was introduced, and Quin encouraged players to think carefully about both their movement and positioning to receive a pass, for example taking a step back to make the pitch bigger with the defensive players restricted to the internal area.

The final practice was on a larger area and was set up with two teams of three in a possession exercise. An extra “joker” player was added, who worked with whichever team was in possession at the time, creating a 4 v 3 overload. A fairly standard exercise, however the key here was in the coaching, and is a great example of coaching players rather than simply putting on sessions. Firstly, players were encouraged to keep possession effectively – play a “killer” pass rather than just keeping possession for the sake of it, and by the same token, keeping possession individually rather than passing the ball if this was the correct option. Quin encouraged the players to “defend” the possession, and even where the ball went out of play, applauding players who would knock the ball off via an opponent so they had possession at the restart. He also picked up on the social element again, encouraging players not to simply call names but to give direction. The learning element was the most prominent however – Quin had a number of substitute players on the sidelines, and would switch players if they made an error. The coach explained this was not meant in a negative manner but as a learning tool, as players had to identify why they were being removed. He also mentioned that with more familiar players, the group could make the decision on who was removed (for example was it a bad pass or a bad touch?), and indeed, players would write their error on a board next to the pitch and review at the end of the session. This ensured players understood the principles of the game and learned for the future.

In the debrief, Quin gave further details of the social element of his coaching with the youngsters at Watford. He steers away from traditional ways of interacting such as asking for a show of hands or Q & A, ensuring all individuals contribute. He also gave an example of dealing with disruptive squad members by using the “ignoring” method rather than intervention, saying that such players are usually just requiring attention. He also spoke of the structure of sessions, briefing players on the content of the next exercise before a drinks break so that they could mentally prepare themselves. He called it the “News at Ten” delivery, where the newscaster will review the headlines and then say “coming up next..” before an advertisement break. He was also keen to emphasise the difference between the “training effect” and the “learning effect” using the methods already outlined in the session – this reminds of the Johan Cruyff comment that England has too many coaches and not enough teachers.

Do you use the social element in your sessions and are you making them a training environment or a learning environment? Please comment below or fill in the form to download the session plans.

Free Download: Coach Your Team to Pass in Tight Spaces

Subscribe to our weekly newsletter and receive free Academy practise examples to use in your own sessions. 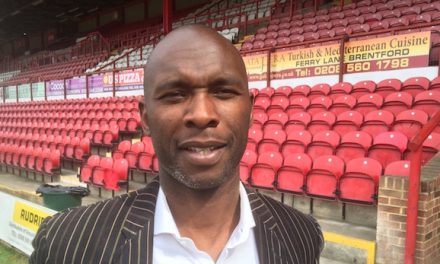 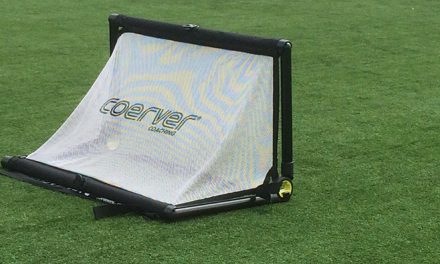 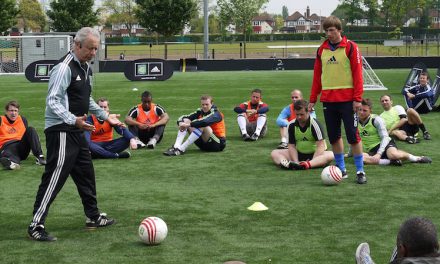