Completing the UEFA B Coaching Badge

Last month saw the conclusion of a long two year journey to gain the UEFA B Coaching Badge (otherwise known in the UK as FA Level 3). I started the course way back at the end of 2010, and this was my first reassessment having been deemed not yet competent first time round. I started the course very soon after gaining the Level 2 badge, and the jump between the two proved to be quite big, but along with the other successful candidates, I was delighted to have reached this level, and am looking forward to increasing my experiences as a coach and helping players improve at the game.

I always intended to write about my experiences on the course, but decided to wait at least until I’d been reassessed. The disappointment of not being up to scratch first time round was very hard, and I deliberately took some time out to practice, observe other sessions, do some reading on theory, to make sure I was better prepared. The first time pass rate at this level is around 30%. That’s quite a damning statistic, and bear in mind that Britain is way behind other European nations in terms of the number of coaches with a minimum of the UEFA B Coaching qualification. I did pose the question last year at the FA Coaches Conference at Wembley, and the response suggested that the revised course which started this year, should develop coaches much better and see an increase in the standard of coaching. 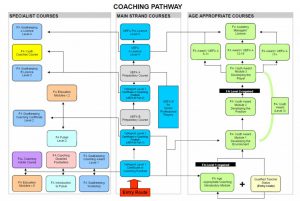 The FA Coaching Pathway when I started the course.

Let’s take a look at the basic coaching pathway to get an understanding of how coaches develop. Assuming you’re not someone with experience at the top level of the game, your first port of call is the FA Level 1, which I completed about ten years ago. Effectively what this teaches you is how to organise a coaching session, gives you a selection of sessions to use, and as with all other courses, you have to complete a first aid course and a child protection awareness course. I seem to remember pretty much anyone who turned up to all the sessions and assessments passed the course, and for anyone with the remotest football knowledge, it wasn’t taxing, but I also remember our assessors being selective with who they suggested move on to the next stage.

Level 2 is quite a jump, because here you actually have to coach players, not just put on a session. You have to understand the techniques involved in the game, and make relevant coaching points within the sessions you put on. You are coaching from technique (unopposed) to a skill (opposed) to a 4v4 game situation, and have to be able to coach all players involved. In addition, there are tasks on nutrition, football fitness, and putting together a programme of sessions, so it is more for coaches involved with a club. Passing the course certainly wasn’t as straightforward as Level 1, I seem to remember the pass rate in my group was about 75%. I would say from my own experience, that those with the Level 2 badge can say they can coach the game, rather than just put on a session.

As I found out, the jump to UEFA B is again quite big. Suddenly you’re not just coaching the game to small groups, but thinking about coaching in areas of the pitch and phases of play, so not only what the player on the ball is doing, but players around the ball, and players away from the ball. I found this one of the hardest things to grasp. It’s very easy to follow the ball and see what’s going on in that particular area, but you have to look at a bigger picture, how other players are assisting or could be doing so better in other areas of the pitch. It seemed to crop up time and time again in our practice sessions where our tutor would say “you coached a good Level 2 session there, but….” and explained about other players in the session. Another issue with completing the course, and this may be a reason why the course is now done on a national scale, is getting bodies to take part in the session. If you imagine you’re putting on a session that involves 15-20 players, you need them there to practice. The particular association that are putting on the course need a steady supply of willing players to take part. In my reassessment group, we were fortunate to have a group from a local pro club’s community scheme who came down to take part. They were a very talented and enthusiastic bunch and it helped no end.

As well as completing the coursework, which involves more on nutrition, football fitness, planning a complete coaching programme and match analysis, the final assessment involves delivering a functional practice, that is a particular topic in an area of the pitch and involving 10-15 players, and then a phase of play practice, which would be on anything from half  to two-thirds of a full-sized pitch, and involve 15-20 players. One topic would be defensive, the other attacking. A couple of bits of advice certainly helped me to get a clearer picture of what the assessors are looking for. Say for example, you have a defensive topic. You have to go into the assessment with a clear idea of what you are going to coach, and what you want the players to do. So for example, the first coaching point might be the nearest player to the ball. Then you coach the supporting players to the first player. Then you concentrate on the cover players. All the time, ensuring you are correctly coaching defending, so pressure on ball, delay, support with correct angle and distance, forcing play in a direction, compactness, tracking, recovery runs, communication. The second bit of advice was delivering the coaching points, and making sure the demos were ‘live’. That is, ensure the ball is moving and other players are moving as you demonstrate and then get the coached player to demonstrate. Otherwise, the demonstration is not realistic.

Once I had got my head round these two points, I really felt my coaching sessions improve, and though the assessment wasn’t perfect, the assessor felt I had shown enough to earn the badge. Now starts the work of improving my coaching further and progressing to the next level, whichever path I decide to take. 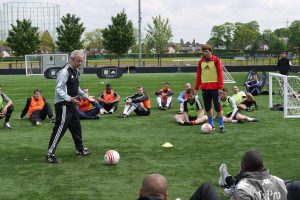 Surely there is room for techniques like that taught by Coerver in the FA’s Coaching pathway?

It’s interesting to reflect on the coaching pathway at this point. Ever since completing Level 1, and particularly after seeing the jump to Level 2, I’ve thought that the Level 1 badge was very basic, and really doesn’t teach a candidate to coach the game. Surely there could be a way to bring in some of the excellent methods used by the likes of Coerver Coaching, to ensure that even the base level qualified coaches are teaching players are  to master the ball. I’ve said before, that if we more of our young players mastering technique, it will improve the quality of players coming through the system in years to come.

The UEFA B badge, as mentioned previously, has now become a national course, meaning it will cost each candidate a minimum of £1000 to complete, far more if they decide to take it at St George’s Park. Will this mean that a large number of coaches will be unable to afford the course, and therefore whether the course is improved or not, the limited numbers taking part will continue to stall the improvement in coaching in the UK? Similarly, those that are not making a full time career out of coaching may not be able to spare the time to complete the course. While I agree there is a need to improve the course and ensure the quality of coaching is of the highest standard, funding at the grass roots level has got to be improved to ensure there are no barriers to those that want to improve their skills and pass on the knowledge. It is all very well the FA and Premier League throwing money at the top level professional clubs, but every single professional player started at grass roots level, and that’s where improvement in coaching standards and therefore young player’s technique will have the most impact overall. 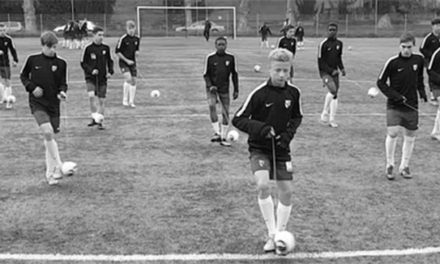